The Ecstall Project covers 28,407 hectares prospective for Cu-Au-Zn-Ag VMS deposits and is 100% owned by Kingfisher Metals with no underlying royalties.

The project covers the majority of the highly prospective and underexplored Ecstall Greenstone Belt. A property wide VTEM geophysical survey outlined +40 high quality geophysical targets throughout the property. The Kingfisher team followed up on only one of these targets in 2019 which resulted in the discovery of the high-grade Shiner Zone.

The Ecstall Project is located in Northwest British Columbia, a resource-dependent region and home to the booming $40 Billion LNG Canada facility in Kitimat.

The property is strategically located at tidewater which provides access to a direct freighter shipping route to Asia.

A 9.6MW BC Hydro dam is located near the Northern end of the project which will allow easy access to power.

Historic logging roads are present at both the North and South of the project. 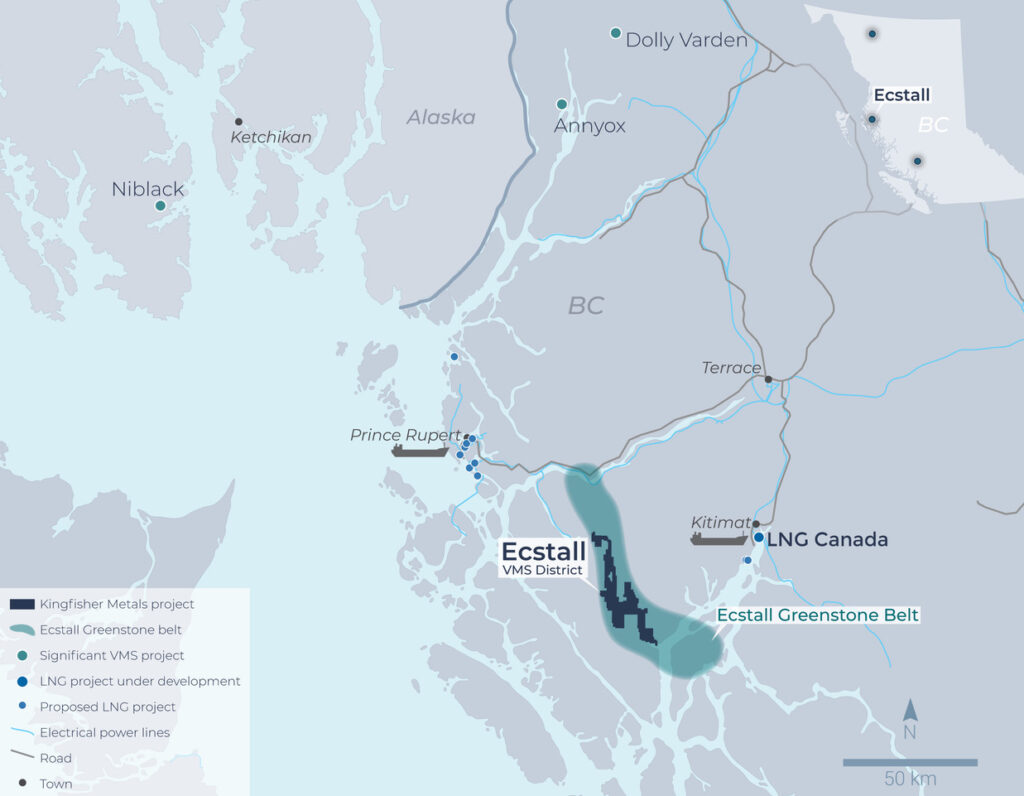 Discovery and Development of the Ecstall Deposit (Granby Mines/Texas Gulf)

Discovery and Exploration of the Packsack and Scotia Deposits (Texas Gulf)

Drilling of the Horsefly target and identification of 2.5km of stringer hosted Cu-Au mineralization at Thirteen Creek.

Assembly of the largest ever land position in the Ecstall Greenstone Belt, the first ever property wide VTEM survey, and the discovery of the high grade Shiner Zone.

The Ecstall Greenstone Belt is located within the southern most section of the Devonian aged Yukon-Tanana Terrane on the central coast of British Columbia. The Ecstall Greenstone Belt which is part of the Central Gneiss Complex, consists of metamorphosed volcanic, sedimentary, and intrusive rocks that are bound on either side by younger Jurassic and Cretaceous intrusive rocks which are part of the Coast Plutonic Complex.

The majority of the property covers a NW-SE trending metamorphosed volcanosedimentary package of rocks.  The Ecstall Belt represents a mid-Devonian volcanic arc that likely developed in a similar setting to the Finlayson Lake District in the Yukon Territory.  The geologic history of the property began with mid-Devonian volcanism and syn-volcanic intrusive activity with subsequent sedimentation.  This was followed by several phases of intrusive activity and deformation ranging in age from Jurassic to Eocene.

Metavolcanic rocks are intruded by two large, elongate, mid-Devonian plutons called the Big Falls tonalite.  The metavolcanics package and its coeval subvolcanic stocks areoverlain by a regionally extensive package of metasedimentary rocks, consisting of a lower metapelitic unit and an upper quartzite unit. These strata are overlain in turnalong the eastern margin of the Ecstall belt by a mafic gneiss. The protolith for this black and white banded gneiss is interpreted as a mafic volcanic package of lateDevonian age.

The metavolcanics unit is heterogeneous. Biotite schist, hornblende-biotite schist and semi-schist comprise 70% of the unit. Interlayered with these lithologies are lenses of pyrite-quartz-sericite schist up to 100 metres thick, as well as amphibolite, quartzite, metasiltstone and calcareous muscovite-biotite schist layers. These smaller lenses may extend along strike for several kilometres. Mafic metavolcanics rocks are preserved as strongly deformed pillow lavas and fragmental basalts, and as intensely foliated mafic schists or amphibolites. Subtle fragmental textures are preserved in some amphibolite outcrops.  The lithologic heterogeneity observed in the unit suggests a highly dynamic depositional environment. Discontinuous carbonate lenses appear to be primary and are indicative of a subaqueous environment.

Felsic volcanics within the belt are the primary host to mineralization.  They occur as heterogenous units composed of pyritic quartz-sericite schist interlayered with 10-20 meter thick bands of muscovite-bearing quartzite and hornblende-biotite schist.  Quartz-muscovite schist is a medium to coarse- grained rock with significant sulphides, containingon average 5% to 15% pyrite. These rocks also locally display relict clastic or fragmental volcanic textures. Primary compositional layering, on a 1 to 10 centimetre scale, is defined by alternating quartz and phyllosilicate layers. Pyrite seams or layers, up to 4 millimetres thick, are concordant with compositional layering and characterize the lithology.  Pyritic quartz-sericite schists are interpreted as metamorphosed felsic volcanic flows, tuf fs and fragmental rocks associated with subaqueous extrusion.

At least four plutonic events post-date the middle to upper Devonian stratigraphic succession. An extensive suite of small, weakly deformed diorite stocks are scatteredthroughout the central Ecstall belt. One stock has yielded an Early Mississippian age, which may indicate the age for all these plugs. In addition to Paleozoic intrusions, two elongate plutonic bodies of Early Jurassic age, the Johnston Lake and the Foch Lake tonalites, intrude the eastern part of the belt. The two bounding plutons, the mid-Cretaceous Ecstall on the west and the Paleocene Quottoon on the east, have associated dikes, sills and small stocks which cut the Ecstall belt rocks.

The stratigraphic sequence has been isoclinally folded. Strata are exposed as a mirror-image sequence along the two margins of the belt.  The two plutons of Big Falls tonalite are likely repetitions of the same subvolcanic pluton duplicated by folding.

Rocks of the central Ecstall belt are highly deformed and characterized by north-striking, steeply dipping to vertical foliation defined by near-parallel compositional layering and cleavage.

Drill highlights from the Horsefly Zone include high grade intercepts over narrow intervals (Table 1.).  The Horsefly Zone remains open in all directions and was highlighted in the 2019 VTEM airborne geophysical survey.

Across the Ecstall Project, numerous massive sulfide showings exist including the Shiner Zone discovered by Kingfisher in 2019.  The Shiner Zone encompasses an area of steeply dipping disseminated, stringer, semi-massive, and massive sulfide mineralization over 400m in strike and 100m in width.  Associated with the Shiner Zone are several VTEM modelled Maxwell plate conductors that extend to 700m+ depth below the surface.

The Thirteen Creek Zone covers an area of disseminated and stringer hosted mineralization stretching over 3km and in close proximity to the Ecstall Deposit.  The area includes copper and gold soil anomalies over 2.5km; and surface sampling up to 9.84 g/t Au, 350 g/t Ag, and 8.05% Cu.