The Goldrange Project covers 36,692 hectares and is 100% owned by Kingfisher Metals.

The project covers broad area of high-grade orogenic gold mineralization similar in style to the Bralorne Gold Mine which produced 4.2M oz gold at 17.7 g/t.  The project sits ~140km northwest of Bralorne along the same regional fault network host to numerous gold occurrences. The Goldrange Project covers a broad area of highly anomalous gold and arsenic in stream sediment samples with limited historic exploration and no diamond drilling despite hand mining activities dating back to the 1930s.

The Goldrange Project is located in resource-dependent Central British Columbia, near the forestry and mining town of Williams Lake.

The project is located within 12km of forest service roads and ~35km from transmission lines that pass through the nearby community of Tatla Lake. 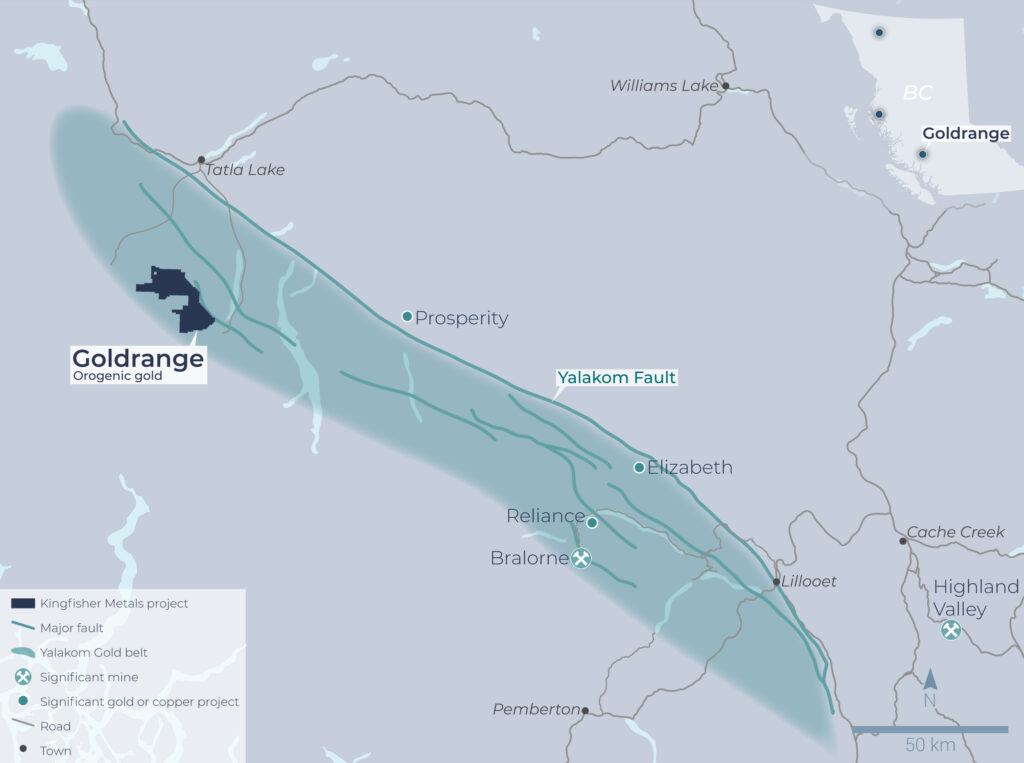 Gold was discovered on the Argo-Langara showings by early prospectors, accessed by horse trails from Tatlayoko lake

Significant exploration and adit workings on what is now the Cloud Drifter Trend (Argo, Langara and Standard showings)

Discovery of gold veins by Homestake Mineral Development Company in the A zone, and results of gold grades of up to 2.6 oz/t in float, and discovery of multi-ounce gold in float in the ‘Three Ounce Valley

The Lotus gold prospect was discovered with Au values up to 0.664 oz/ton Au, as well as the Champagne vein to the north

Skeena Resources Ltd. completed reconnaissance prospecting and sampling program including results with > 6 oz/t Au in float near the HW showings

The Goldrange Project is located within the Coast Belt, adjacent to a major NW-striking structural boundary with the Intermontane Belt to the northeast. In the area of the project, the Coast Belt includes the pre-accretion Stikine terrane (Stuhini and Hazelton groups), post-accretion metamorphic rocks (Triassic to Cretaceous), volcanic rocks (Ottarasko Formation; Lower Cretaceous) and sedimentary rocks (Cloud Drifter Formation; Lower Cretaceous). These rocks are overprinted by mid-Cretaceous fold-and-thrust contractional deformation, which is in turn cut by a Late Cretaceous to Paleocene granodiorite (Bendor suite) and overlain unconformably by Powell Creek Formation (upper Cretaceous) volcanic rocks to the east.

The Goldrange Project includes both pre- and post-accretion layered rocks (upper Triassic to upper Cretaceous) as well as intrusions of Cretaceous age. Boundaries between layered rocks are either thrust or strike-slip faults. The southern extent of the project is underlain by sedimentary and volcanic rocks of the Mount Moore and Cloud Drifter formations, and a very small domain of the Powell Creek Formation along the southeastern margin of the claims. The southern project is partially bound to the south and north by two northeast-elongate Bendor suite intrusions. The northern Goldrange project is underlain by the Cloud Drifter Formation to the east, and a series of thrust fault-bound panels of volcanic rocks of the Ottarasko Formation and limestone and volcanic rocks of the Stuhini Group.

Layered rocks (Triassic to upper Cretaceous) of the Goldrange project have undergone deformation (D1) and metamorphism related to the formation of the East Waddington fold-and-thrust belt, active between 82-87 Ma. Thrust faults carried Triassic and Cretaceous rocks to the northeast along W-dipping thrust faults, which are subparallel to bedding. Beds in the Cloud Drifter Formation include both right-side-up as well as overturned, separated by E- and W-dipping axial planes to overturned, thrust-bounded, isoclinal folds. Metamorphism is syn- to post-kinematic and metamorphic grade increases from northeast to southwest with a series of NW-striking, SW-dipping isograds. Metamorphic grade ranges from sub-greenschist in the Powell Creek Formation to greenschist and amphibolite in the Ottarasko Formation. A second deformation event (D2) is associated with gentle, NW-trending folds.

Gold mineralization within the western part (mesozonal) of the project occurs primarily within discrete quartz (±carbonate) with pyrite, arsenopyrite, and chalcopyrite with total sulfide abundancies ranging from trace to 5%.  Pathfinder element signatures include As, Ag, W, Te, and Bi and alteration minerals include chlorite, fuchsite, and ankerite.

There are several historic gold occurrences across the project and despite historic hand mining activities, there has been no drill testing across the Goldrange Project.

¹ Historic data compiled from publicly available data.  Historic samples range from below detection limits to the maximum value noted in the above table.