The 12,475 Ha Thibert Project straddles the crustal-scale Thibert Fault for 25km which is thought to be the source for a significant placer gold camp that dates back to the 1870s.

The project is located along the boundary of the Cache Creek and Quesnel Terranes and encompasses broad areas of silica-carbonate-fuchsite alteration and regionally anomalous orogenic gold pathfinders (Au-As-Sb-Hg) in stream sediment sampling.

The Thibert Project is located ~40 km north of the resource and mining town of Dease Lake and covers 25km strike length along the Thibert Fault which is believed to be responsible for significant placer production of ~200,000 oz Au since the early 1870’s.

The project is located adjacent to Highway 37 and has a pre-existing placer road network throughout the tenure. 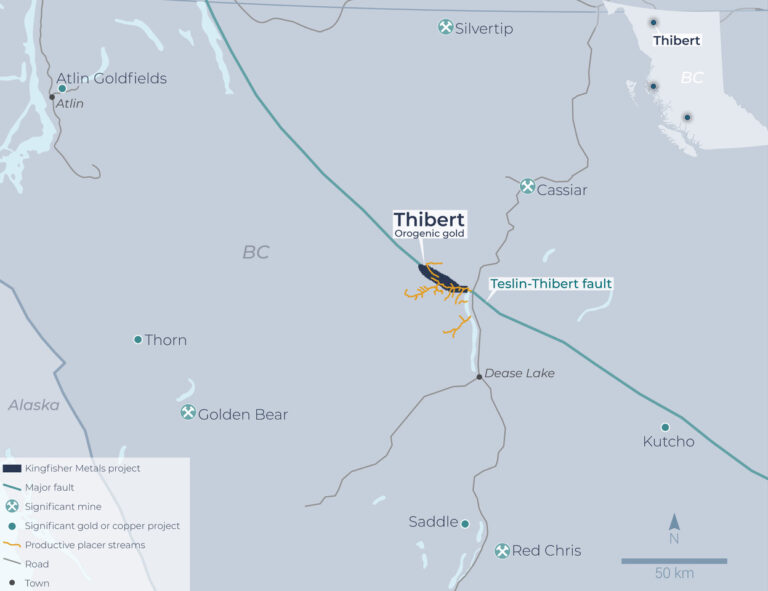 The Keystone Showing was discovered upstream of the Boulder Placer Mine with reports of 9.1 g/t Au over 12.2m within a quartz porphyry.

Equity Silver Mines completed a limited amount of backhoe and hand trenching in the Boulder Creek area. One hole (152m) was completed.

Nu-Lite Industries completed a ground magnetics and VLF survey over 6km. Four drill holes (648m) were completed in an attempt to intersect the down dip extent of the Keystone Showing. No significant intercepts were reported despite a Northern Miner article (May 4th, 1998) reporting 7.09 g/t Au over 7.62m. Further programs by Netseers Internet Corp (2000) and Jet Gold Corporation (2006) did not return any significant gold mineralization.

The Thibert Project follows the surface expression of the Thibert Fault system with the Cache Creek Terrane on the south, Quesnel Terrane to the north. Terrane bounding faults are often deep seated and crustal scale, reactivated during accretionary strike slip tectonic faulting, and are important controls for mineralizing fluid conduits.

The exotic Cache Creek terrane represents a tectonically emplaced package of rocks with oceanic affinity that is separated from the volcanic and sedimentary rocks of the Quesnellia terrane by regional faults. These faults include the Thibert, Kutcho, and King Salmon faults.

The Cache Creek Complex is comprised of ultramafic rocks that are inferred to be Mississippian to Triassic in age. The Cache Creek complex represents upper mantle and lower crustal portions of an idealized ophiolite sequence.  Also within the Cache Creek terrane are equivalent portions of an upper, younger portion of an ophiolite, comprised of mafic to intermediate volcanic and pelagic sediments. The Kedaha, and Inklin formations represent the upper most portion of an ophiolite, whereas the Kutcho and Nakina formations represent volcanic and intrusive rocks that are thought to be upper to lower crustal equivalents. Variably serpentinized peridotite is the most abundant lithology within the ultramafic units. Peridotite is comprised of predominantly harzburgite, lherzolite, and dunite. Peridotite is typically weathered orange/brown, and is dark green to black unweathered (fresh). Pyroxene bearing peridotites typically contain 10‐20% orthopyroxenes, minor augite and contain accessory chrome spinel and secondary magnetite.

The predominant lithologies of the Cache Creek terrane found on the Thibert Project are; peridotite that has been variably serpentinized, metasedimentary rocks of the Kedaha Formation, and intrusive rocks of the Takla Group.

Within the Thibert Project, Takla Group lithologies include the Shonektaw formation and Nazcha Formation.  Cache Creek rocks include Fine grained quartzite and carbonaceous shales of the Kedaha Formation.  Shales are fissile and flaggy mud stone with variable amounts of carbon. Sandstones and siltstones have been metamorphosed to foliated meta-quartzite. The strike of the well developed foliation roughly parallels that of the Thibert Creek Fault. The schistosity generally dips 60 to 70 degrees.

Ultramafic rocks occur as lenses of serpentinized peridotite in close proximity to Thibert Creek and the Thibert Fault.

The source rocks of the placer gold mined in Thibert Creek appear to be the narrow band of ultramafic rocks along the Thibert Fault. The only gold producing creeks in the area either follow or cross the Thibert Fault.

The highest gold values during placer mining were recovered from the gravels in Thibert Creek downstream from Berry Creek with lesser concentrations at the Mosquito Creek, Thibert Creek junction, and in tributary creeks such as Defot, Bear, and California.